An Ancient Art in Modern Times

There are few things that stand the test of time, but falconry is one of those things that has, and is flourishing in our modern times, thought to have its roots in ancient Asia around 2205 BC. Ancient man used his hawk to provide him with food that would normally elude him, nothing worse than seeing your dinner disappear into the sunset.

During the reign of the Tudors falconry was made all the more popular, being rich and having no television man had to amuse himself so a day’s hawking was a great distraction. Henry VIII made falconry very popular and he took the theft of a bird very seriously; if you were caught stealing a bird of prey, a bird would be weighted and the same weight of skin would be removed from the thief and fed to the bird.

Falconry today has changed little in the way we train our birds but modern technology has. Telemetry is now used so if a bird is lost it can be tracked and reunited with its owner. Light weight alloy bells will also alert you to where your hawk may be. 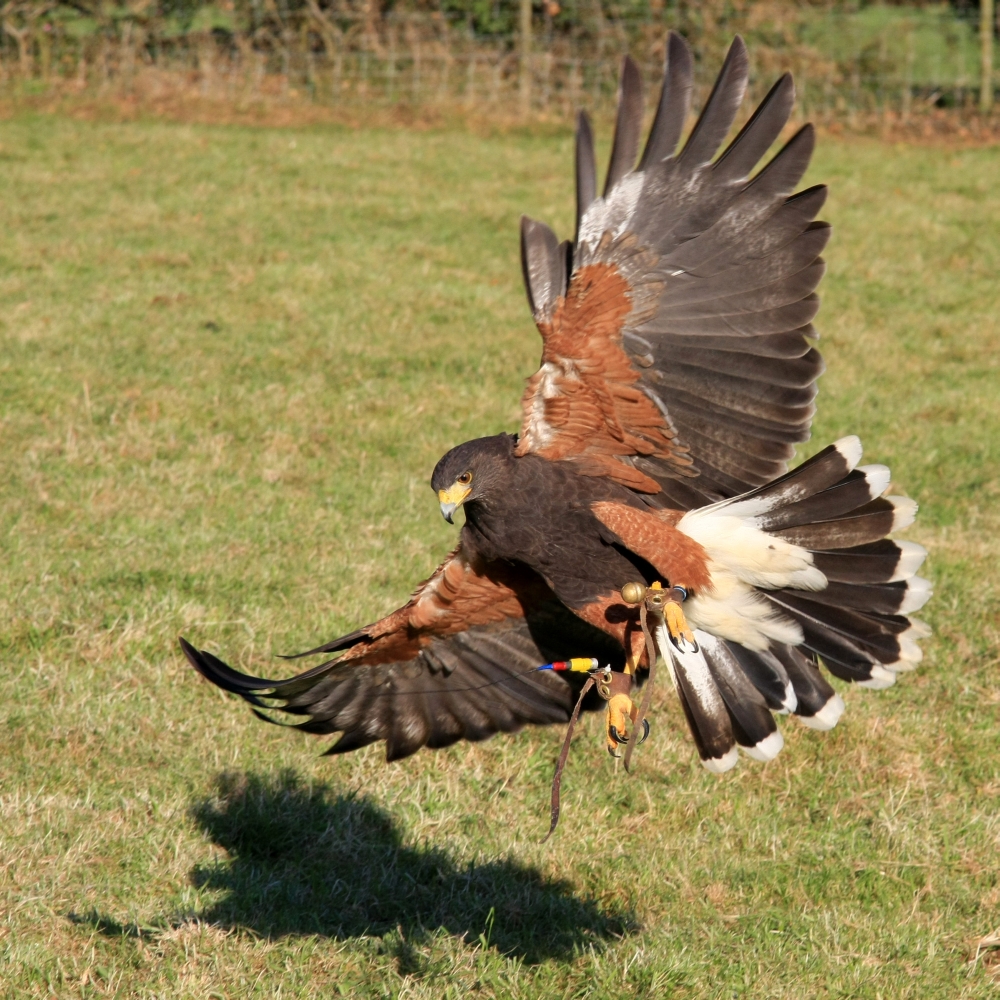 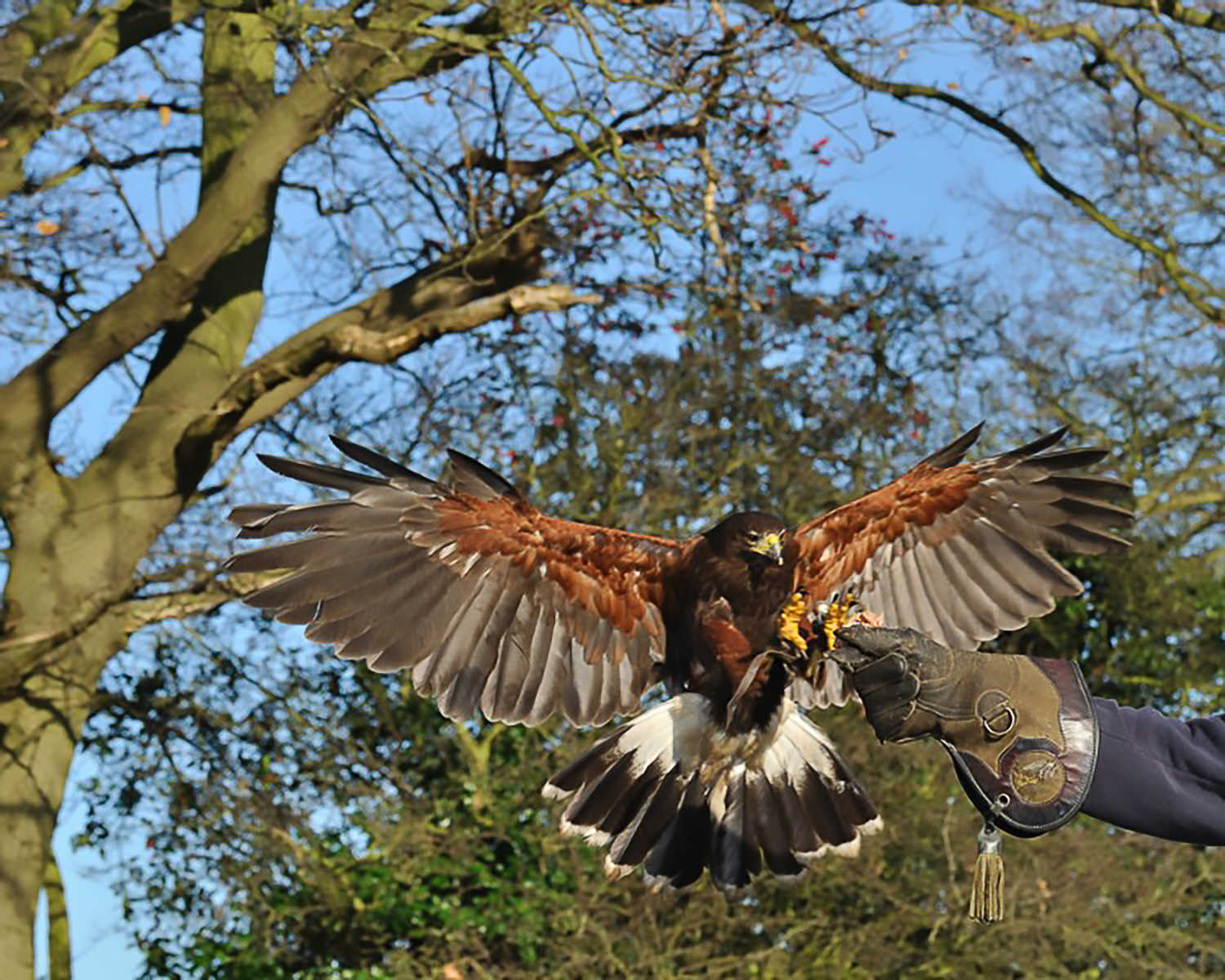 The modern bird of prey’s role has changed as well. Although some people still hunt their birds and use the quarry to feed to the hawk, it’s more of a sporting day out. Some raptors are used in pest prevention at airports to stop birds flying into jet engines, some are used in cities to remove our ever growing feral pigeon problem. Feral pigeons are a natural hybrid ,that is to say two separate species breeding to make a new species. One parent is the rock dove that used to nest on the cliffs around the coast line, that is why the feral pigeon likes our tall warm buildings to nest on. The other is man’s racing pigeon, these always return to the loft no matter how far you take them away which is why they are difficult to remove and any future generations of pigeons will always return to the place they were born.

Many types of raptors are used in pest removal – falcons in open areas where they can use their speed and agility, keeping in mind our own native peregrine can reach speeds of 230 mph and the hawk for more built up areas. Harris Hawks (Para buteo usinctus) are the preferred bird for the job because they have a gentle nature, fly slower and are easy to train due to their high intelligence. They will also work as a group unlike many other raptors who would kill and eat each other. There is a growing need for the use of raptors in pest prevention as pigeon populations are growing rapidly and with this comes mess and disease,. Many of London’s buildings have to be cleaned at great cost due to pigeon faeces which eats into soft stone, aluminium and rubber and the dried faeces contain a fungus Psittacosis which will make you very ill and could kill you. The fungus is passed from generation to generation of pigeons typically by the mother feeding her young, of which she can produce eight.

The Hawks are used merely as a deterrent; this instils fear into the pigeon population and should stop the females from producing eggs, so with no young being born and the old dying naturally , the population will reduce. If you were to actively hunt pigeons your hawk would catch and kill its quarry, drag it onto a ledge high up and that’s the last you would see of your bird for three days, so with good training and a not so hungry hawk, pest birds are controlled in a more eco friendly way.

There are many myths about falconry click below to find out the facts.

Our Sister company provides bird of prey static and flying displays, as well as Falconry days. Click below to find out more.

This website uses cookies to improve your experience while you navigate through the website. Out of these cookies, the cookies that are categorized as necessary are stored on your browser as they are essential for the working of basic functionalities of the website. We also use third-party cookies that help us analyze and understand how you use this website. These cookies will be stored in your browser only with your consent. You also have the option to opt-out of these cookies. But opting out of some of these cookies may have an effect on your browsing experience.
Necessary Always Enabled
Necessary cookies are absolutely essential for the website to function properly. This category only includes cookies that ensures basic functionalities and security features of the website. These cookies do not store any personal information.
Non-necessary
Any cookies that may not be particularly necessary for the website to function and is used specifically to collect user personal data via analytics, ads, other embedded contents are termed as non-necessary cookies. It is mandatory to procure user consent prior to running these cookies on your website.
SAVE & ACCEPT